Winthrop is one of the best recreation areas in Maine, and a premiere commuter town, being centrally located to all of the major service areas of Maine. Cobbossee Lake is nationally recognized as one of the best fishing lakes in America, and Winthrop Public Schools consistently rank as one of the best public school systems in Maine.
Winthrop is a historic and forward-thinking community that people are proud to call home and where young families like to establish their roots for generations to come. It’s a community that offers vibrancy and interest. Winthrop is a safe and attractive destination for homebuyers, businesses and visitors with its community events, award-winning schools, lakes, public parks, hiking trails, library, YMCA, local offices of the highly acclaimed MaineGeneral Health, and Police Department.
Since its beginnings, Winthrop remains a steady, reliable, efficient and fiscally responsible community with an overriding goal to be responsive to the needs of residents and businesses. Join us! 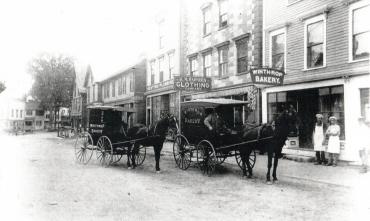 Thank you to the Bailey Library for this photo of 1800s Main Street
Winthrop was a town 5 years before the Declaration of Independence, and 50 years before Maine became a state. It lies just a few miles west of the capital Augusta, and covers an area of 38 square miles, 17% of which is water, which is why it was originally known as Pondtown. Before Timothy Foster arrived in 1765, the Abenaki tribes successfully planted crops, fished, and hunted, until they and the French were driven out by the English settlers. In 1759 a surveyor divided the town into 200-acre lots, each 1600 feet wide by one mile long. A real estate entrepreneur from Massachusetts arrived in Winthrop and sold many of the lots to his former neighbors. John Chandler was given 3 lots near the stream running through the center of town, if he would agree to build a sawmill, grist mill, and settle in town. Five new dams were built on the stream, providing power for the many large and small industries that sprung up to meet the local's needs. Winthrop's apple orchards and Jersey cattle brought it fame. In 1791, the area of Readfield that had been part of Winthrop separated and became an independent town. The town meeting form of government yielded to the selectman/manager form, and finally in 1974 it adopted the current council/manager form.The town's most famous industrialist was Charles Bailey, owner of several oilcloth factories, who at age 96 in the last year of his life donated to Winthrop the Bailey Public Library building, which is listed on the National Register of Historic Places, and still in use today. Bailey also donated two Quaker Meeting churches. Winthrop's natural beauty attracted hundreds of tourists over the years, aided by the Maine Central Railroad's two stations in town, a local trolley system that connected Winthrop with Augusta, and steamboats on Lake Maranacook. Today, the Winthrop Lakes Region Chamber of Commerce helps local businesses and provides information for tourists and prospective new residents. An invigorating hike 807 feet up to Mt. Pisgah, the highest point in Kennebec County, affords a panoramic view of the area. On Cobbossee Lake you will find the only active lighthouse on inland waters in Maine.
Thank you to Carl Swanson of the Winthrop Maine Historical Society for this brief History of Winthrop

CENSUS >>
Census information can be found by visiting: www.census.gov/quickfacts/winthroptownkennebeccountymaine